A new thing in the US Army 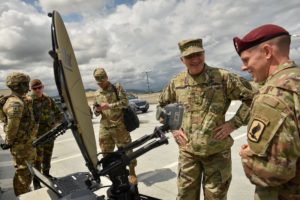 Members of the 173th Parachute Brigade of the United States Army announced on Twitter that these days in Vicenza presented General Kertis Skaparothi, US Supreme Commander for Combat tactical network, a sophisticated information system that enables the rapid transmission and sharing of all essential information from one to the other commander.

As explained at the previous test of “ITN”, at the German military training pillar Grafenver, this system makes it easier for both line leaders and senior managers to operate. It ensures that they know the exact positions and locations of other units at any time, and follow the direction of their movement.

In addition, “ITN” can also be used to control the results of artillery fire and its correction for better results, as well as for sending photos, voice, and text messages. One thing is certain: thanks to “ITN”, the former communication with large military radio stations and phones is now a long way from the past.