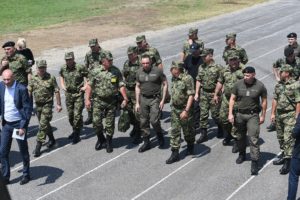 Defense Minister Aleksandar Vulin and Chief of General Staff of the Army of Serbia, General Ljubisa Dikovic, today in Kraljevo, followed the general rehearsal of the military exercise “Joint Stroke 2018” to be held in that city on June 27th.

Skills will be shown by members of the Special Brigade, the Military Police Battalion and the special unit “Cobra” as well as the support force from the aviation brigades of the RV and the PVO. They will carry out this exercise together with members of the Gendarmerie, SAJ, the Helicopter Unit of the MUP of Serbia, the Police Brigade, and the Police Intervention Unit.

Participants of the exercise will show the rescue of hostages and the neutralization of terrorists in closed facilities and motor vehicles. According to the Ministry of Defense of Serbia, the goal of this exercise is to train the forces for rapid reaction of the Serbian Armed Forces and special police units to jointly plan and conduct counterterrorism operations.