“Role and importance of KFOR for Serbs and Albanians on Kosovo”, NATO@70

Within the NATO @ 70, “Role and importance of KFOR for Serbs and Albanians on Kosovo” project organized by the Atlantic Council of Serbia and YATA Serbia in March and April 2019 under the patronage of NATO PDD.  This project took place in Pristina, where The Atlantic Council of Serbia took three groups on three trips- young students and professionals, young entrepreneurs and representatives of Serbian media. The aim of the project was to reconcile the youth of those two ethnicities, to reconnect entrepreneurs in hope that they will continue theirs professional cooperation and to show media the real picture of Kosovo, KFOR etc. Those groups also visited KFOR base in Film City in Pristina, US Army base Bondsteel and Serbian Orthodox Monasteries that were protected by NATO forces in KFOR operation. More than 70 people took part in this project. 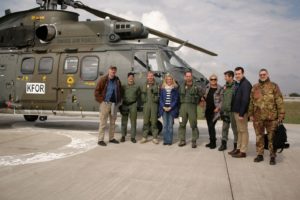 „Educate the educators“ project, organized under the auspices of the Embassy of the United States of America in Belgrade, has been designed by the Atlantic Council of Serbia. The Project activities were implemented in Belgrade and in Fruska Gora in December 2018.  A one-day conference in ACS premises in Belgrade gathering 40 university professors has been organized on December 21st 2018 with the aim to open a discussion with and among participants on the geopolitical importance of mostly technical state of affairs in the field of Russian v/s USA nuclear weaponry and the geopolitical influence of this ratio on the world in general and our region in particular. Following prominent professors spoke at this event: Momčilo Milinović from the School of mechanical engineering of the Belgrade University, Professor Dragan Simeunović from the Faculty of Political Sciences in Belgrade, Professor Mr. Vladan Kutlešić, national expert in the field of the Constitutional Law.

The second phase of the „Educate the educators “Project took place at the Conference center „Ceptor“in Fruška Gora, nearby Novi Sad, on December 28th and 29th 2018 with the participation of more than 60 young researchers, teachers, assistant professors and professors from both Belgrade and Novi Sad Universities. 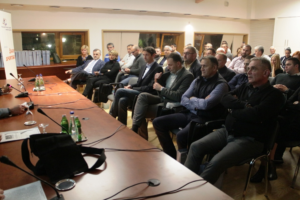 The Atlantic Council of Serbia and Youth Atlantic Treaty Association hosted a conference and a series of workshops for young people of the western Balkan’s  region as a part of the project “YOUTH OUTREACH”. It took place from the 29th to the 31st of October 2018 at Atlantic council of Serbia, Belgrade. This project was supported by US Embassy in Belgrade and NATO PDD. 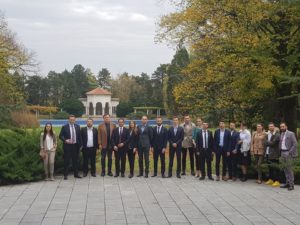 Atlantic Council of Serbia under the auspices of the US Embassy in Belgrade, organized a conference under the tittle “Cooperation between Serbian Army and military forces of NATO member countries”. This event was held on September 20th 2018. in Belgrade, in Crowne Plaza hotel, conference room Baltic.

The conference was attended by prominent representatives from political, social and non-governmental sectors as well as by foreign military attaches. Mr. Vladan Živulović the President of Atlantic Council of Serbia gave the introductory remarks. After introduction the following participants spoke: Collonel Milan Ranković, Head of Department for International Military Cooperation, Sector for Defense Policy in Ministry of Defense of Republic of Serbia; General Cesare Marinelli, Chief of  NATO Military Liaison Office in Belgrade; Collonel Douglas Faherty, Military Attache at the US Embassy in Belgrade; Mr. Dragan Šormaz, Representative in Serbian Parliament; Mr. David Gehrenbeck, Political Counselor at the US Embassy in Belgrade.

The conference was enhanced by the presence of dozens of military attaches, representatives of the NGO sector and prominent Serbian media 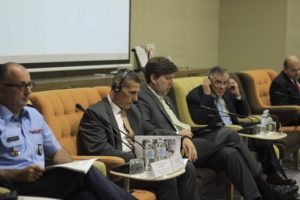 “Forming the future of Serbia in the era of insecurity” – conference

At the recently held conference “Forming the future of Serbia in the era of insecurity”, the moderator and representative of the Atlantic Council of Serbia Vlade Radulović, in his introductory speech, referred to the achieved results and activities realized in 2017 and announced the plans and projects that the organization should realize in 2018. As an introduction to the conference, he pointed out that at the end of November last year, the US Atlantic Council presented a report under the same name as the conference, but aimed at responding to the shaping of the future of the Balkans.

During  2017, the Atlantic Council conducted a series of workshops, discussions and debates that, in addition to the cooperation of the Republic of Serbia with NATO and the places occupied by the Euro-Atlantic integration in the home media, dealt with the topics of media freedom and the challenges of contemporary journalism, journalistic ethics and objective reporting issues . During May and September, workshops for students and young journalists from Belgrade and Vojvodina were held with the aim to find and offer new modalities of professional development of journalists through an interactive debate with prominent lecturers and to improve the reporting on the process of Euro-Atlantic integration in Serbia

From July 3 to July 7, 2017, the Atlantic Council of Serbia held the “Summer School of Atlantic Integration”. The project is conceived as a five-day, informal form of education for young people on the topic of relations and cooperation of the Republic of Serbia with the NATO alliance. The project aims to bring together 30 young students and members of political parties in Serbia, as well as representatives of NATO, US and Greek embassies in Belgrade, the Government of the Republic of Serbia, as well as guests from the region. In addition to lectures, the project envisages that attendees visit two state institutions, and in the evening, joint activities are planned. Such as film screenings, working dinner according to the model of “café discussion” and the closing party. The concept is divided into three parts.

On 25 April 2017, a conference of the Atlantic Council of Serbia was held at the Hotel Moscow. On behalf of the organizers, the conference was officially opened by the Executive Director of Mr. Vladimir Radulović, who pointed out that the Atlantic Council of Serbia is persistent in its efforts to give a clear picture of what cooperation with NATO is, and that its organization advocates full membership and the complete integration of Serbia into Euro-Atlantic institutions.

Summarizing the activities of the Council during the previous year, Mr. Radulović pointed out that the main goal was to sign the IPAP agreement while the main focus of the ongoing activities will be young people, especially young journalists who will attend the summer school in July this year.

On 6th December 2016, the Conference of the Atlantic Council of Serbia “Crisis Management” was held at the Hotel “Moskva”. The conference was attended by relevant stakeholders/ interlocutors from the field in order to draw attention to the importance of proper and timely engagement and to use all available mechanisms in case of emergencies.

“Development of energy policy and security in Serbia” – round table

On 17th October 2016, in the hotel “Moscow”, with the support of the United States Embassy, a round table on energy policy and energy security of Serbia was organized. Participants and speakers of the round table were: Milan Mišič, Mirza Kušljugić, Vladimir Gligorov, Zoran Milivojević, Bojan Gajić, Carolina Hidea and Aleksandar Kovačević.

At a discussion, it was established that the available energy policy of Serbia is not sufficient to support long-term investments in the energy-intensive high-productivity industry and to guarantee the security of supply and sovereignty of the country. The conclusion is that a new energy policy is needed.

The conference began with the opening address of the President of the Atlantic Council Mr. Vladan Zivulovic. After his opening remarks, discussion start by Mrs. Dijana Ivancic (Head of Department for NATO and Partnership for Peace, Ministry of Foreign Affairs), who at the very beginning said that Serbia’s relations with NATO have been historically difficult, and continued by stressing the importance of the IPAP for Serbia. She highlighted like absolutely necessary that public being informed in a timely and transparent manner about the cooperation between Serbia and NATO. It is particularly important to stress “NATO is not only a military organization, but also a political-security alliance”.

The main goal of our conference was to encourage dialogue and debate between media representatives and officials. Keeping that in mind we can say that this conference was very successful. After very interactive and interesting discussion with audience, our panelists concluded that investigative journalism is virtually non-existent. In this moment the media is full of misconceptions about the cooperation between NATO and Serbia. All of relevant actors must take active role in process of changing this situation and improve the public information strategy like one of the most important aim for every democratic society.

According to our analysis of media coverage all of relevant media in Serbia reported the news about conference. The news was relayed by all news agencies (Tanjug, Beta and FoNet) and other internet portals and media (Voice of America, Kurir, Politika, Blic, TV Happy, TV Kopernikus, Radio Beograd). We’ve covered the representation of conference on the internet, by posting news about it on social media and on official site of the Atlantic council of Serbia.

REPORT FROM THE FINAL TRIBUNE IN BELGRADE

On Tuesday 17 June, in Belgrade, at Megatrend University, the Atlantic Council of Serbia, with the support of the Embassy of the United States, held a final debate on the topic: “Living in Serbia: Opportunities and Challenges. “