The military exercises of Serbia and Russia in August 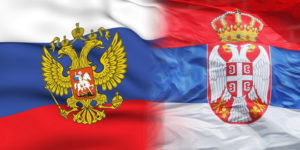 In mid-August this year, Serbia and Russia will hold joint military exercises. “One of the significant events of international military cooperation is scheduled for the second decade of August – military exercises with a Serbian army detachment in which the (Russian) motorized infantry company deployed in the Leningrad region, as well as the air force unit, will take part,” said the commander of the Russian Western military district, Andrey Kartpolov.

The President of the Atlantic Council of Serbia, Vladan Zivulovic, says it is very important ...

Friend in need is a friend indeed! 💪🏻😊Respect and thanks from Serbia to all YATAs who made this video come true! Stay strong!👩🏽‍⚕️👨🏻‍🏫👩🏼‍🔬👨🏼‍✈️👨‍🚒 ... See MoreSee Less