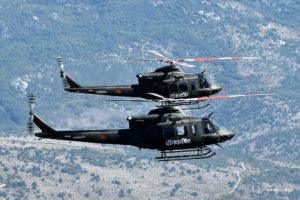 Yesterday, a ceremony was held at the airport in Podgorica on occasion of landing two new multipurpose US helicopters “Bell 412 EPI” for the Army of Montenegro (three of which were purchased by the Government of that country). The total value of all three helicopters is 30 million Euros, and as the contract for their purchase was signed at the beginning of this year by Predrag Boskovic, the Montenegrin Minister of Defense, that country wants to improve the capacities and capabilities of Montenegro’s air force, as well as other types of her armies.

“This is because the new helicopters will be used for transporting units, search and rescue operations, air support for land and sea operations, medical evacuations, fire extinguishing, and monitoring the territory of Montenegro,” he said.

Otherwise, Montenegrin Prime Minister Dusko Markovic has stated about the arrival of new helicopters that Montenegro already feels the first direct benefits of NATO membership. He said that the inflow of foreign investments to his country from NATO member states in the first six months of this year increased 2.5 times compared to the same period last year. He added that since Montenegro’s accession to NATO, the number of tourists from the countries of the Western military alliance has increased in that country. According to him, it is higher by 25 percent compared to the same period last year. Markovic also said that the data in the best possible way denies those who have doubted the benefits of Montenegro’s commitment to Euro-Atlantic integration. NATO has so far repeatedly praised the Montenegrin Army and the Ministry of Defense of that country for contributing to the Western military alliance by participating in its mission in Afghanistan, as well as in other United Nations and European Union operations. We recall, since June 5 this year Montenegrin skies patrol the Italian airfare “typhoon” aircraft, as well as F-16 fighters, the Air Force of Greece. It’s part of the so-called. A “air-policy” mission under the auspices of NATO.