The EU helped our army and the police 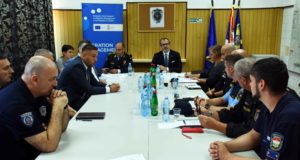 Although Serbia is not yet a member of the European Union, this community of states continually helps our country and our institutions, and sets aside large sums of money from pre-accession funds. This has been seen many times, and these days significant donations have been handed over to our police and military. Head of the EU Delegation to Serbia, Sam Fabrici, donated equipment worth EUR 1 million to the Head of the Border Police Administration of the Serbian Ministry of Interior Milenko Bozovic on 11 July, which significantly improved the conditions for the work of the border police. The handover was organized in its Regional Center towards Bulgaria. The attendees had the opportunity to see a part of the donated equipment – bats and helmets, binoculars, handheld thermovision cameras, spotlights, anti-dispatching devices, travel document readers, etc. Ambassador Fabrici said that besides this equipment, EU donations consist of a sum of 2 million euros. It is aimed at raising the capacity of our border police through its cooperation with police from the EU countries. We recall, they helped Serbia control our border with Bulgaria, and stopping the migrants. There were 50 of them from other EU countries. Five days later, on June 16, the EU Delegation to Serbia was donated by the Ministry of Defense of Serbia in the amount of 1,200,000 euros. So much is the value of a special aircraft that our army has received and equipment for shooting terrain, which makes it possible to make maps of areas most vulnerable to floods.

“I hope that this equipment will be well-used, and that it will help the Military Geographical Institute of the Serbian Armed Forces in the prevention of natural disasters. This is part of a wider package that will help Serbia, as well as EU member states, to create a different society, more resistant to the damage caused by natural disasters, “Fabrici said.