Stoltenberg: “Justice needs to be satisfied”

“I support the decision of the Joint Investigation Team from the Netherlands to raise charges against suspects for crashing a Malaysian Airlines passenger plane on the MH-17 flight in July 2014. It is an important move in efforts to ensure justice because of the 298 victims from 17 countries on that plane.”. This was stated by NATO Secretary General Jens Stoltenberg on the decision of the Dutch investigators to publish the names and surnames of the three Russians and one Ukrainian who are suspected to be guilty. He added that he has the maximum confidence in independence and professionalism of investigators from the Netherlands who are entrusted to conduct this investigation. The first man of NATO recalled that the United Nations Security Council had previously appealed to all countries to cooperate in efforts to uncover the truth, justice and responsibility in this case. We recall that NATO Secretary-General earlier in May 2018 urged Russia to accept responsibility and cooperate fully in efforts to identify those responsible for the disaster of the Malaysian Airlines aircraft. Stoltenberg did this just after a Joint Investigation Team from the Netherlands announced that after a thorough investigation, it was irrefutable and beyond any doubt that a Malaysian plane was shot down by a rocket fired from a Russian anti-aircraft launcher “Buk”, which was located near Kursk and belonged to 53 Anti-Air Brigade of the Russian Army. Although accused of demolishing a Malaysian plane are not available to the Dutch judiciary, international arrest warrants have been issued for them and the trial is scheduled for 9th March 2020.

2019-06-22
Ivana
Previous Replacement of the most important ambassadors in some Balkan countries
Next The US president confirms: “Godfrey is a new ambassador to Serbia” 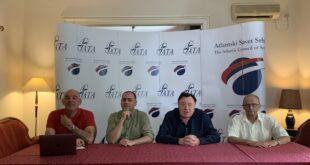 On June 21, the Atlantic Council of Serbia held a conference “Non-Military Aspects of NATO” ...