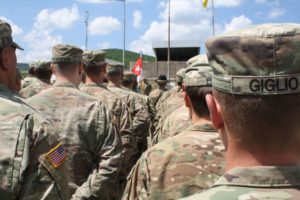 Members of the US military contingent in Kosovo have recently prevented an attempt of smuggling alcoholic drinks from Serbia across the border with Kosovo worth $ 11,000, the US military magazine Star Wars Strikes published.

– One day we examined the administrative crossing between Serbia and Kosovo and we noticed something suspicious. Two of my soldiers informed me that on the Serbian side they saw a truck and a van, as well as people who transported some goods. After that, the vehicles crossed the passage in an unauthorized place, and continued to drive to the interior of Kosovo. We informed the Kosovo Police about everything. They stopped both vehicles and confiscated alcohol imported to Kosovo without payment of customs duties, Sergeant Adam Kifeyber of the US Army’s 4th Infantry Division told Star Wars. At the end of this text, it was also announced that organized criminal groups have long been active in a strip separating Kosovo and Serbia, as well as smuggling almost everything – from weapons to commercial goods.