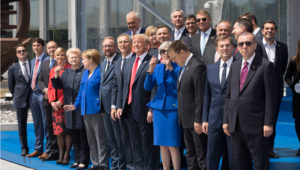 The 25-strong helicopters of 13 NATO armies, above the new headquarters of the organization in Brussels, began today a two-day summit of the Western Military Alliance. According to many political analysts, it will have major implications for its future. As announced earlier, the presidents of NATO member states will discuss today on the first day on topics such as strengthening forces to deter potential enemy attacks and defense in the event of its coming, fight terrorism, increase the percentage of money from national budgets that stands for common defense, intensified cooperation with the European Union, modernization of NATO, etc.

Otherwise, the “impressions of the day” were statements by NATO Secretary General Jens Stoltenberg and US President Donald Tramp. The first man of the Western War Alliance stated that the organization he manages does not recognize the Russian coup, the Russian cyber attacks, the interference in the American elections, and that he severely condemned the poisoning of Sergei Skripal and his daughter Julia in Solsbury, but that he thinks that regardless , Russia should not be isolated!

On the other hand, US President Donald Tramp accused Germany of being in love with Russia before the start of the summit because he was working with that country to build a gas pipeline in the Baltic Sea.

The summit in Brussels will also attend, as the guest, the President of the Atlantic Council of Serbia and ATA Vladan Živulović

Previous NATO: How to be faster than terrorists
Next American military fighting against smuggling in Kosovo