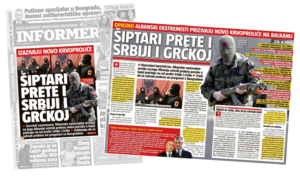 How do Serbs in Kosovo feel when Serbian tabloids publish texts from “supposedly” well-informed sources in which new conflicts and bloodshed are announced in that province, are only known to them. However, something more scary happened these days: Almost all Serbian daily newspapers, TV stations, and internet portals have provided false information as true! More than 30 portals, daily newspapers and TV stations have reported over the past 24 hours a disinformation about the alleged new threats of the “Albanian National Army” (ANA) at the expense of the Serbs in Kosovo. The false news continued to expand even when the Dutch journalist Vincent Trent, who published her on the Twitter account, apologized to the public for showing the video as being new for several months, published the Internet portal “Fake news tracer “. Despite the multiple evidence that this video is old, our daily newspapers continued to mislead the public. “Informer” went on, so he announced that “members of the notorious terrorist organization ANA were threatened with a new war and bloodshed, not only in Serbia, but also in Greece”! Not a little encouraging is the fact that “Politika” has believed in this false story, so the oldest Serbian newspaper announced that “ANA” had threatened terrorist actions in Serbian territories in Kosovo and announced that it would bring them out if the idea of exchange Serbian territory in northern Kosovo for the Presevo Valley “. After all this, it is even clearer to see how fake news can be dangerous, and how important is the fight against them!

Previous Turkish soldiers back in Kosovo!
Next The Atlantic Council of Serbia organized a new conference:”Cooperation between Serbian army and NATO member country armies”