The US Secretary of Defense hosted an English colleague in Washington 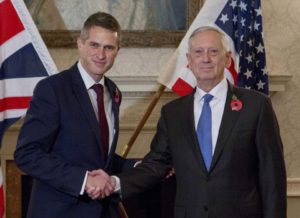 On August 8, US Secretary of Defense James Matisse, along with a slow-moving cordon of soldiers, met in front of the Pentagon building in Washington, DC, of ​​his guest, UK Defense Minister Gavin Williamson, who arrived on an official visit to the United States. According to Pentagon spokeswoman Dana V. White, the two ministers will discuss a number of topics during the talks that will lead together with their closest associates to empower the long-standing alliance between America and the United Kingdom.

“It’s still on the shoulder and we fight together to defend freedom and common values. As an example, I would like to thank the Government of the United Kingdom for almost doubling its contribution to joint troops and the mission of “Determined Support” in Afghanistan, “said Secretary Matisse. He supported Great Britain’s efforts to modernize the armed forces of that country. During his visit to Washington, the English Defense Minister also addressed members of the American NGO “Atlantic Council”. Among other things, he said that Britain was and will always remain a military super-power of the first level, capable of sending its troops anywhere in the world. He recalled that Great Britain has strong nuclear powers, special units of the world class, that it is capable of cyber warfare, and that it has exceptional conventional troops.

Previous Vulin: “People trust their army most!”
Next KFOR: “We are here to defend all people”