KFOR: “We are here to defend all people” 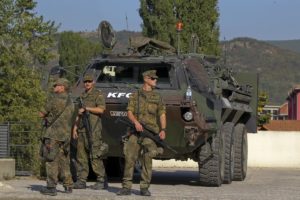 “The Gazivode dam was not blocked, nor did our armed forces take control of any hydro power plant. The situation is calm and under control. We are doing normal duties in the north of Kosovo, in accordance with UN Resolution 1244. Here we are to defend all people, “KFOR mission in Kosovo announced at the beginning of this week.

This announcement was made after alarming warnings from some of our tabloids that KFOR troops, which are normally leading NATO, intensify their presence in the northern part of Kosovo, next to Lake Gazivoda. We recall, Gazivoda hydroelectric power plant and Valač substation are crucial for Kosovo’s electricity supply. The Kosovo authorities are asking our country to take over, but our state institutions are opposed to this, given that they are owned by electric power industry in Serbia.