How does NATO fight against terrorism? 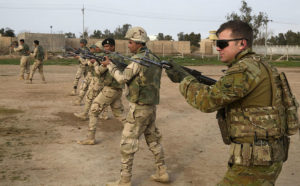 The US mission, as reported on their Twitter account, is that the Western Alliance is fighting terrorism on three fronts (in Afghanistan, Iraq, and together with the members of the Global Coalition to Win ISIS). She is helped by Tunisia and Jordan. Among other things, it is stated that in Afghanistan a large mission “Resolute Support” is under way, in which 41 countries with almost 16,000 soldiers participate. It encompasses the training and training of the Afghan army, and the participants of this exercise are unique in their efforts to help improve the peace process in Afghanistan in which the people of that country are headed by the main word. When it comes to combating ISIS, at last year’s NATO summit it was decided that the Western Alliance would join the Global Coalition to win the terrorist state. For now NATO is contributing with its AWAC support system in which the E-3A Air Force aircraft overwhelms enemy territory within a radius of more than 400 kilometers, oversees airspace, and then sends or transmits information to digital data links on land, in the sea, and in the air. One of the important results of this year’s summit in Brussels is that NATO, at the request of the government in Iraq, decided to send several hundred people who will have an unmarked role. They will train officers in the Iraqi army in an effort to develop military education in that country, and national security infrastructure. NATO has also announced that it will help members of that organization in its South Wing in dealing with problems such as terrorism, weapons smuggling, irregular migration, and regional instability. In order to make this fight even more effective, Regional Centers in Kuwait and Naples were formed.

Previous What is the biggest benefit Serbia would have from EU membership?
Next A “Close encounter” between NATO and Russian aviation over Romania