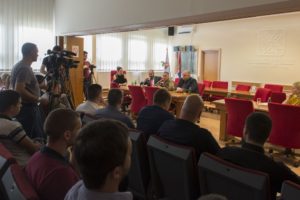 Italian General and KFOR Commander, Salvatore Kuci, is the first commander of the international forces in Kosovo who met Serbian students in Kosovska Mitrovica. He recently talked to them at the University of the city, after a welcome to him by the Rector of the University Rade Grbic. After Kucho finished his presentation, students asked him about the security situation in Kosovo. Responding to their concerns, the Italian general convinced them that KFOR was strictly committed to contributing to the creation of peace and freedom of movement for all people in Kosovo. He added that the security situation was improved after nineteen years from the arrival of KFOR in that province. In his words, for international troops in Kosovo it is very important to contact the youth in Kosovo to know how young people are looking at the current situation. Kuci stressed that KFOR will not change the character of its mission, nor will it reduce the number of soldiers in Kosovo regardless of the fact that the war has passed, and that now is the biggest challenge of shaping the future.

“Do not rob stories and prejudices, think with your own head” – he commanded KFOR chiefly saluting Serbian students at the end of their meeting.