Vulin: “Serbian Army can cooperate with the strongest” 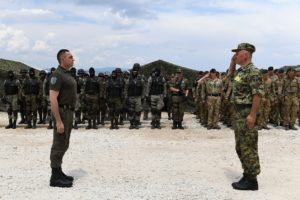 The Serbian Armed Forces in this way shows that it is able to cooperate with the most developed armies of the world and be able to transfer its experience, just as it can accept and receive the experience from other armed forces – said on June 21, the Minister of Defense of Serbia, Aleksandar Vulin, attending the “Day of High Officials” at the base of Serbia “South”, organized to mark the end of the international military exercise “Platinum Wolf 18”. Vulin stressed that the state of Serbia is militarily neutral, and as such cooperates with the East and the West. He also emphasized that the state of Serbia will always take care of maintaining a balance in its foreign policy, as it maintains a balance in its military, and in its armament and preparation.

The soldiers, non-commissioned officers and officers who participated in this exercise were also addressed by US and UK ambassadors, Kyle Scott and Denis Kif.

-I am particularly happy that the cooperation between the Serbian and US military is deep and that we have three times more exercises with Serbia than Serbia has with any other partner. We are proud of this, and the results are also visible, Ambassador Scott pointed out.
– Our army has the opportunity to participate for the second time in the “Platinum Wolf” exercise. It is very important for us, because we can develop our cooperation in this area, as we are developing in other areas with Serbia. We want to have an important role in Serbia and in the Western Balkans in the future. I hope that this cooperation will continue to develop, “said Ambassador Kif, among others. Apart from that, at the “Platinum Wolf” exercise, about 500 officers, non-commissioned officers and soldiers of the United States, United Kingdom, United Arab Emirates, Bosnia and Herzegovina, Bulgaria, Hungary, Romania, Montenegro and Serbia took part.