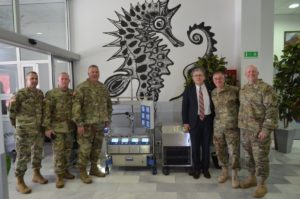 Representatives of the National Guard Ohio and Tennessee, who were following the military exercise “Platinum Wolf 2018” in our military base “South”, made good gestures before returning to the United States. They donated to the Cardiovascular and Transplant Clinic five new medical devices in the new hospital in Nis in the total value of 400,000 euros.

The head of the clinic, Dr. Dragan Milić, said that this equipment will be used in the intensive care unit and in the operating room. He added that, thanks to that US Army grant, it will now be possible to increase the annual number of operations from 250 to 800, and that there will be no waiting list anymore.

Warner Roses from the National Guard Tennessee said he was pleased with the attendance at the Platinum Wolf exercise, and because of the opportunity to contribute to the health care system of Serbia. Military attaché of the US Embassy in Belgrade, Col. Douglas Ferti, pointed out that this donation would hopefully enable the capacity to provide services across Serbia.

Dr. Dragan Milić said that the Collegium of the Niš Clinic decided that the operation unit of the hospital in that town would be named Woodrow Wilson, according to one of the previous US presidents. On July 28, 1918, he proclaimed the “Serbian Day” and ordered the Serbian flag to be placed on the top of the White House

Previous Vulin: “Serbian Army can cooperate with the strongest”
Next NATO Secretary General: “We will overcome current disagreements”