Army of Serbia at NATO exercises in Bulgaria 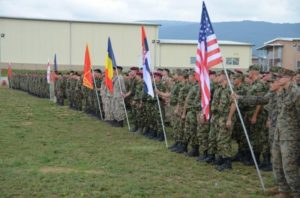 Yesterday, a military exercise “Platinum Lion 18” started in Bulgaria, where together with 600 soldiers from seven NATO member countries (Albania, Bulgaria, Georgia, Moldova, Romania, Montenegro, the United States) members of the Serbian Army participate. It will last until August 10th, and our country will be represented by soldiers of the 31st infantry battalion of the Third Brigade. “Platinum Lion 18” is a tactical drone-firing exercise aimed at enhancing the cooperation and interoperability of members of the military of partner countries at the tactical level, during offensive and defensive military operations in a multinational environment. Otherwise, this and similar similar exercises in Bulgaria was organized by the Marine Corps of the US Army for Europe and Africa, and the Army of Serbia has been participating since 2012.

Previous NATO: “In the autumn the biggest military exercise in the last 30 years”
Next What is important for NATO to defend its members?