NATO: “We appreciate Georgia for cooperation with us” 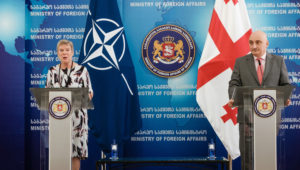 NATO Deputy Secretary General Rose Gotemeler went on an official visit to Tbilisi last week where she spoke with the country’s president, prime minister, and defense minister. Besides those meetings, she gave a lecture to the students of the State University in Tbilisi.

Gotemeler also held a press conference with Georgian Foreign Minister David Donduo. She reiterated NATO’s commitment that Georgia should become a member of the Western Military Alliance, and thanked to the country for its contribution to NATO.

Among other things, Gotemeler said: “Your country, Georgia, is a country whose contribution to our mission “Resolute Support” in Afghanistan and our troops in this country is large and significant. You help normalize the situation in that country, as well as the destruction of terrorists and their hideouts. We in “NATO” deeply appreciate the strong support of Georgia “NATO” operations and missions”, said Deputy Secretary General of that military secretary.

Previous The Atlantic Council of Serbia organized a new conference:”Cooperation between Serbian army and NATO member country armies”
Next NATO’s door remains open to all interested