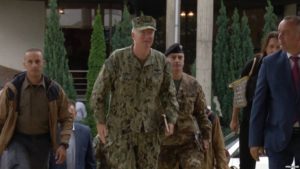 Admiral James Fogo, the first man of the NATO Joint Force Command in Naples, has visited Kosovo again these days. He first talked with the igman Sava Janjic in the monastery Dečani, and then the building of the municipality of Dečani held a press conference together with the Mayor of Bashkim Ramosa and Paljo Ljekajem, Minister of the Government of Kosovo. Iguman Sava Janjic reminded the high delegation of NATO and KFOR of the bishop Teodosije’s Rasa-Prizren diocese with clergy and monks over the intentions of ethnic and territorial demarcation in Kosovo that were heard at the highest state level. That, as Janjic added, can cause unexpected negative humanitarian and security consequences for our people, but also for the entire region.

At a press conference in the SO building Decani Minister of Infrastructure Ljekaj commented on earlier problems regarding the intention of the Kosovo authorities to build a road that should pass through the protected zone in which the Monastery Monastery is located. He said that an agreement would be reached on the dispute, and that there would be no single-sided construction interventions within the protected zone without mutual consent. The journalists had the most questions for Admiral Fogo, and they were talking about the announcement of a possible division of Kosovo. He replied that as a NATO military representative he did not attend the talks between Vucic and Thaci, and he did not know how the potential plan for the partition of Kosovo looks.

“They (Thaci and Vucic) are your democratically elected representatives, and represent the interests of the majority in these countries. Like all democratic leaders, I firmly believe that both of them are looking for solutions to difficult issues, and that they, like me and General Kuchy, support a safe and secure environment, which is why we are here, “Fogo said. He added that the president of the municipality of Dečani and the defense minister in the Kosovo government promised that the Law on special protected zones would be respected when it comes to building a road near the monastery in Dečani.

Previous On the occasion of the completion of the overhaul of the Russian MIGs: “Do we have spare parts?”
Next Montenegro bought US military helicopters