On the occasion of the completion of the overhaul of the Russian MIGs: “Do we have spare parts?” 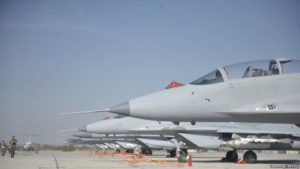 President of the State and Supreme Commander of the Serbian Armed Forces, Aleksandar Vucic, together with the Defense Minister of our country, Aleksandar Vulin, and the military top of Serbia, at the Batajnica Airport received yesterday the test flight of the first two MIG-29 aircraft from eight, as received by our state as a donation from the Ministry of Defense of the Russian Federation federation. Vucic said that he also used today’s visit to visit six more MIGs, which are jointly modernized by Russian and Serbian experts. He said that in the upcoming grand military parade organized by Serbia in November, on the occasion of the end of the First World War, visitors will be able to see in the air all eight “MIGs-29” donated by the Russian Federation. He added that when he became Defense Minister, our aviation had only one “29” who could fly, and that we would have nine in two months! Vučić also announced that in the months following the gain and the number of combat and transport helicopters from Russia and the factory “Airbus”, which will significantly increase the combat readiness of our aviation. However, the texts that could be read on social networks on the occasion of completing the training of Russian “MIGs” for flying appeared information that our Air Force does not have enough spare parts for Russian “MIGs”, and that, For example, we have to ask Russia for tires!

As a confirmation of this information, the data was published in October last year after a military exercise at the Batajnica airport that one of our “MIGs 29” is no longer used for flying (since 2010), but only to be removed from it only spare parts that are installed on other planes! Military analyst Miroslav Lazanski has denied such rumors so far on several occasions. He said that the contract on the modernization of all Russian “MIGs” also included the purchase of spare engines and rockets for them, as well as a large number of other spare parts