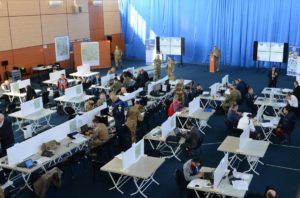 The KFOR mission in Kosovo, together with the NATO Advisory Team and the  Team for Connections, as well as UN and EULEX, hosted a great exercise “Silver Saber 2”, which was held besides in Pristina, in the camp Camp City, the name of the KFOR headquarters.

As reported on the KFOR website, 17 institutions and organizations in Kosovo participated in this exercise, and their common goal was to harmonize the measures and procedures that they would take in case of facing an emergency situation. This exercise was a unique opportunity for the joint work of all competent officials and organizations responsible for the safety of Kosovo citizens in case of natural disasters, and extraordinary large-scale events. The main goal of the exercise plan was to harmonize and increase co-operation between Kosovo state institutions, agencies, and organizations in case they face a natural disaster, and an emergency situation of large scale.

The largest contributor to the effort to successfully implement this exercise for the benefit of all citizens of Kosovo was given by the Training Team of the 77 Brigade of the United Kingdom Army based in Skopje. They were mentors, they controlled  the participants in the exercise, gave them useful advice on how to manage the crisis, directed the media, and reacted in unexpected, complex, and challenging situations.