Warplanes of three countries above England 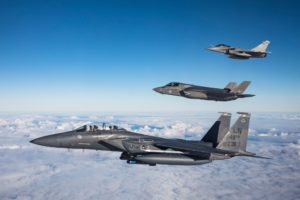 Ten days ago, over the North Sea and East England an important military exercise “Point blank” was held, with English “F-35 Lighting”, US-based “F-15s” and “Rafali” French Air Force. As announced by the British Air Force (RAF), it was a good and first opportunity for the pilots of three airborne aviation to exercise together in the air, and to strengthen mutual co-operation. On the other hand, pilots of English hunters were given the possibility they continue to develop procedures for integrating from the 4th to the most modern, fifth generation of combat aircraft. During the first joint exercises of the Air Force, three countries simulated the attack of enemy planes and their defense, mutual air conflict, and reactions in the event that enemy aircraft begin bombing their homeland.

Otherwise, this exercise is also important because it was an opportunity to try out an American F-35 Lighting aircraft in conditions similar to combat operations. So far, this plane has not been used in such circumstances except once, in Israel. The first experiences are good, despite some media speculation that the company “Lokid Martin” has produced this most expensive military aircraft in the world with more errors! However, these criticisms have been silenced, and the manufacturer is continually getting new orders from countries that are interested in buying the aircraft.

Previous NATO: “Strong support for Ukraine and Georgia”
Next 16 NATO countries do exercise in Germany