NATO began an exercise near the coast of Norway 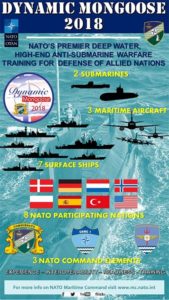 From June 25 to July 6, NATO will hold a large naval and anti-submarine exercise “Dynamic Mungos”, along with the fleet of eight NATO members, to train submarines and carry out all kinds of combat operations to neutralize the enemy. The aim of the exercise is to give the participants an opportunity to strengthen their mutual harmony, and skills in suppressing the opponents’ actions on the seas. The “Dynamic Mungos” includes three submarines, seven different battle boats, and three naval reconnaissance aircraft. In carrying out this exercise, three command elements of NATO are integrated.

2018-06-27
Ivana
Previous The KFOR commander spoke with Serbian students
Next Soon the end of the military exercise of Russia, Belarus and Serbia

The President of the Atlantic Council of Serbia, Vladan Zivulovic, says it is very important ...

Friend in need is a friend indeed! 💪🏻😊Respect and thanks from Serbia to all YATAs who made this video come true! Stay strong!👩🏽‍⚕️👨🏻‍🏫👩🏼‍🔬👨🏼‍✈️👨‍🚒 ... See MoreSee Less