The US Embassy recorded the spot as a recognition for Serbia 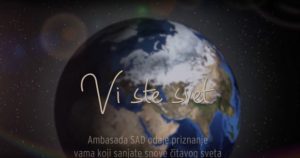 In the campaign “You Are the World”, marking the centenary of the decision of one of the previous US President Woodrow Wilson to raise the Serbian flag over the White House on July 28, 1918 as a recognition for the struggle of Serbia in the First World War, the US Embassy in Serbia she recorded a video about our country “You are the world”. He is broadcasting these days in the advertising blocks of our television stations, and with the abundance of beautiful staff of natural beauties, famous buildings and monuments in Serbia it can be heard that many famous citizens of our country like Tesla, Pupin, Milanković, Divac, Đoković thanks to their dreams achieved enormous successes, overcame the frameworks of our country, and became the citizens of the world.

“If it happens that one of you has given the world electricity, that without you there would be no telephone, some of you would discover the greatest secrets of the planet … If all of this happens, we could say that your country is a country of great people and big dreams. Some dreams begin in Serbia and change lives around you, some dreams change Serbia, some dreams from Serbia have changed the whole world, and because of all that – YOU ARE THE WORLD, “says the commentator in this video.

Before reminding US President Wilson that the Serbian flag was turning over the White House as America’s recognition of the struggle and suffering of the Serbian people during the First World War, this happened only once in the history of the United States. It was July 14, 1920, when a French flag was erected on the mast.

Previous The EU helped our army and the police
Next What is the biggest benefit Serbia would have from EU membership?