Great Britain intensifies its engagement on the Balkan 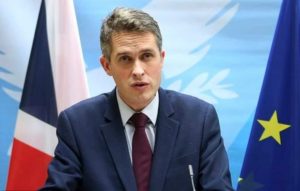 Although Britain has begun the process of abandoning the European Union, it not only reduces but even strengthens its engagement in the Western Balkans and NATO. This was best seen at a summit recently held in London, and one of the supporting evidence is that Romania’s Defense Minister Gavin Williamson is visiting Romania for these days. ” Europe’s security is our security. Even though we are leaving the European Union, our obligations to allies in NATO will remain firm. That is why we are strengthening our military cooperation with Romania with which we already have good relations ” ,Williamson said during a visit to Romania, and was announced by the UK Defense Ministry in his Twitter account.

At a press conference he held with his Romanian-run government in Bucharest, Williamson announced that one of the reasons why the UK Defense Ministry would intensify its security cooperation with Romania would be to deter Russia’s aggression against Eastern Europe. Speaking about that, he recalled the case of poisoning in Solsbery, as well as the intensification of Russian activities in Ukraine, Moldova, and near the Black Sea.

Previous General Skaparoti began a visit to Turkey
Next Vulin: “People trust their army most!”