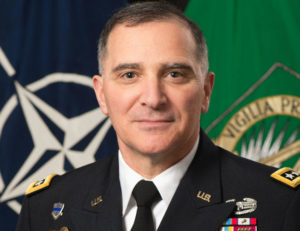 General Kurtis Skaparoti, the commander of the European Command of the US Armed Forces and one of the most important commanders in the NATO structure, began today a visit to Turkey in the context of heightened tensions between the country and the United States. As reported by the Turkish state agency “Anadolu”, referring to sources from the Turkish army, Skaparoti will discuss with her hosts the situation in northern Syria. The main topic will be the presence of members of the so- (YPG) We recall that members of this Kurdish paramilitary formation are loyal to the United States and receive the help of that state since they have fought against the Islamic state and Syrian President Asad but Turkey does not recognize them, and the army of that country is constantly attacking them. Relations between Turkey and America are burdening another problem. US President Donald Tramp and Vice President Mike Pens threatened to impose sanctions on Turkey if that country does not release American Pastor Andrew Branson. He spent almost two years in a prison and on 25 July he was ordered to be detained. During the visit of Scaparoti to Turkey, he is planning to visit the NATO base “Indzirlik” as well as the place in the Izmir region where Branson is detained. Otherwise, the US Congress prepares a resolution blocking the announced sale of US military planes F-35 to Turkey unless it frees pastor Branson, as well as other US citizens charged with terrorism. If it wants F-35s, Turkey will have to give up the purchase of the S-400 from Russia, also insists on America!

Previous KFOR: “We Are Ready to Respond if there is necessary”
Next Great Britain intensifies its engagement on the Balkan