Disinformation 101: War of the Worlds

The usual music radio program is periodically interrupted “for important news”: The alien invasion of New York has begun. They landed in Grover’s Mill (New Jersey) and during the impact the aircraft created a crater. The reporter’s report is interrupted by a panicked announcement that the curious townspeople have been killed by an alien “death ray.”

The Martians are here to kill us, and they’re moving toward New York with a tripod. They release clouds of poisonous smoke.

In the following period, another reporter, stationed by a radio transmitter in Manhattan, reports on the advance, general chaos, massacre, and groups of people trying to escape the cloud of poison gas: “People are jumping into the East River, running away like rats, those who they fail in that, they drop like flies.”

The reporter starts coughing and falls, the technician takes the microphone and asks “Is there anyone?”. The program stops, followed by silence, and then:
“You are listening to the CBS performance of Orson Welles and the Mercury Theater in the original dramatization of H.G. Welles’ The War of the Worlds.” The show will continue after a short break. This is CBS.”

Pleasant jazz, a recording of a band from a New York hotel, is interrupted by a new voice after half an hour. This time the narrator follows one of the survivors who witnesses the consequences of the attack and the occupation of the destroyed New York. It is now clear that this is a radio drama and not a real report on an alien attack. After about fifteen minutes, as in Wells’ novel, the aliens die from the earth’s microbe because they have no immune system.

During the check-out rush hour, the police break into the newsroom and interrupt the program. Journalists shout at the actors: “Do you feel responsible for the suicides?” Did you hear about the traffic accidents, the deaths that followed as a result of the chaos you caused?”

It turned out that the listeners did not experience this drama, which was played as part of the Halloween program, as a drama, but as an informational program. That night, general chaos arose in New York – people began to flee the city, to hide in basements, to call the police in a panic, claiming to have seen aliens and the “air of death” – there was definitely mass hysteria without precedent.

Already at dawn, CBS called a press conference in which the then 23-year-old actor and director of this drama, Orson Welles, took part:
Question: Were you aware of the horror your broadcast caused?
Wells: Definitely not. The technique I used was not original, it was not even new. I didn’t expect anything out of the ordinary.
Question: Did you have to tone down the language of the drama?
Wells: No, murder is not played with soft words.
Question: Why was the story changed to include the names of American cities and government officials?
Wells: H.G. Wells used real cities in Europe, and to make the play more palatable to American listeners we used real cities in America. Of course, I’m terribly sorry now.

Newspapers published at least 12,500 articles about the show and its impact, but the story disappeared from the front pages after a few days. Adolf Hitler mentioned this radio drama in a speech in Munich on November 8, 1938.

It’s been almost 85 years since Orson Welles accidentally showed the world the power of fake news and disinformation. He pointed out the power of the media and the vulnerability of society. He pointed to the responsibility that creators have.

How much have we actually learned since then? 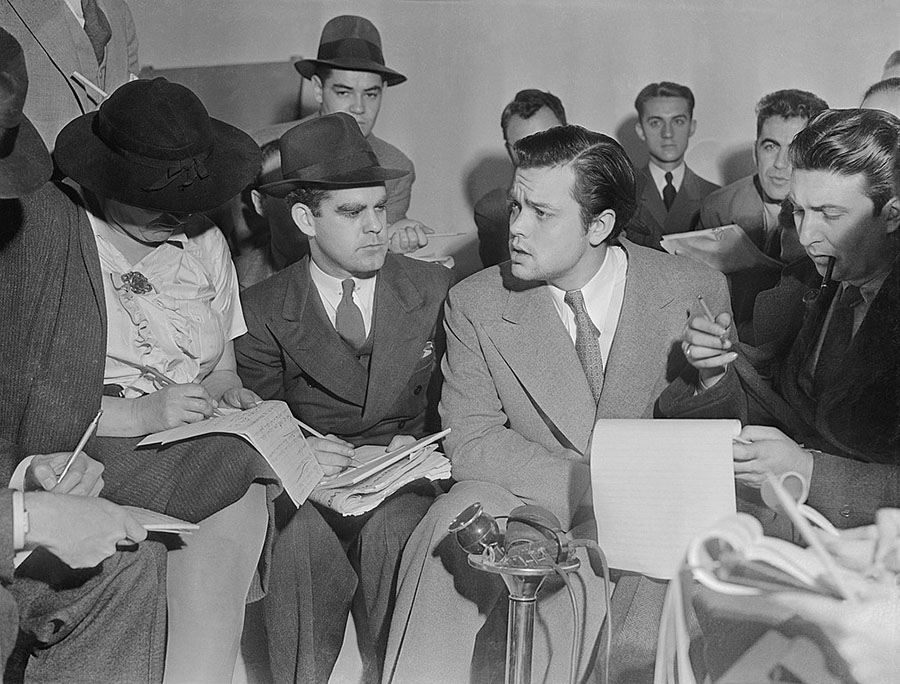 Orson Welles explaining to journalists that he did not want to cause general panic/Photo: Acme News Photos, Public domain, via Wikimedia Commons