Serbian paratroopers at the military competition in Hungary 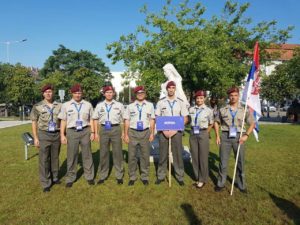 The multi-membered team of Serbian paratroopers travelled to the World Military Parachuting Championship, which is held until August 21 in Szolnok, Hungary. The Serbian Ministry of Defense announced that military teams from 38 countries will take part in the competition. Our team has been participating in this competition for the tenth time, and it is organized under the auspices of the International Military Sports Committee, which is also a member of the Republic of Serbia. Otherwise, parachuting is one of the four military sports within the International Military Sports Committee, and it is a matter of prestige to participate in this competition. Of the 136 countries that have been invited to the competition this year, only 38 of them (including Serbia) have teams that can participate in a sporting event of such a high level.

NATO Allies met in the North Atlantic Council today to consult on the situation in ...