A mysterious Russian organization among the camp organizers in Zlatibor 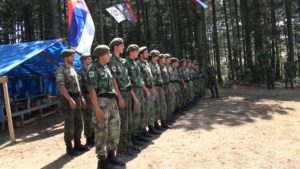 If it is judged by the texts that can be seen on the Internet, the Russian organization “Enot.corp “, one of the organizers of the military-patriotic camp for youth from Serbia, Montenegro, and the Republic of Srpska in Zlatibor, who is imprisoned on the basis of the decision of the MUP of Serbia, has more than a bad reputation! On the site “Stop Terror in Ukraine” it is said that based on the intelligence activities of the activists who held it, it was found that “Enot.corp “under direct command of the Kremlin, and that it has strong ties with the Russian army! “They are one of many Russian organizations that gathers military mercenaries, and soldiers under contract. Among other things they do business with military equipment, and after the Russian aggression on Ukraine began to appear in the territory of Donetsk and Donbas, and to supply Russian militants with weapons! “Enot.corp” has diverse interests “, ranging from support to Russian terrorists, to direct involvement in their combat operations! We have collected enough evidence to support the fact that Enot.corp activists were illegally present in the territory of Ukraine. Although they were a private military company to mask it, they pretended to be a non-governmental organization, and they carried out humanitarian missions, “writes in this text, and emphasizes that Enot.corp advertises its activities on the Internet in several addresses.

Otherwise, “Enot. korp “a few days ago published an attachment of one of our private TV stations from the Zlatibor camp on its website on the Internet. It can be seen from the standpoint that the participants of this camp, among other things, taught first aid, machinery training, alpinism, martial arts, nature training, and fire protection. Arsenije Đurić, Deputy Mayor of Čajetina municipality, is also annexed. He told reporters that the camp also includes people from Russia, but that is not a surprise, since SO Cajetina is the only municipality in Serbia that has a office for cooperation with the Russian Federation! The attachment can also be heard that it was planned to open more such camps in Serbia, and the camera also photographed soldiers dressed in uniforms of parachute units of the Russian army!

2018-08-19
Ivana
Previous Serbian paratroopers at the military competition in Hungary
Next On the occasion of the completion of the overhaul of the Russian MIGs: “Do we have spare parts?”