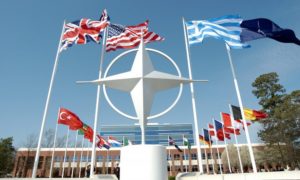 On the occasion of the 17th anniversary of the attack on New York when passenger jets driven by Islamic terrorists collapsed two World Trade Center buildings (“Twin Towers”), NATO published a video pointing to why September 11th 2001 was extremely important in history of that organization. Twenty-four hours after the STC and Pentagon attacks carried out by Al Qaeda members, NATO’s top for the first time since the founding of that organization, on April 4, 1949, decided to activate Article 5 of the North Atlantic Treaty, the act on the basis of which the formation of the Western Military Alliance was formalized.

“Members agree that an armed attack on one or more of them in Europe or North America will be declared an attack on everything. Therefore, each member in the exercise of the right to individual or collective self-defense guaranteed by Article 51 of the Charter of the United Nations will assist the State or States that have been attacked. This will be done immediately. The enterprise shall take all measures deemed necessary for the purpose of achieving or maintaining security, and any such armed counter-attack and the measures taken as a result thereof shall be notified to the United Nations. These measures will stop when the UN Security Council re-establishes international peace and security, and begins to maintain it “-written in Article 5 of the North Atlantic Treaty. In memory of this provision and the day it was activated for the first time, a piece of metal construction of one of the Twin Towers was closed on the plateau in front of the new NATO building in Brussels, which left off on September 11, 2001, both buildings. At the end of the clip published by NATO on the occasion of the 11th of September, it says that this piece of metal will remain in that place in the future, as a reminder of the readiness of NATO members to continue to be unique and solidarity, and react without delay to any threat that is against any of the members of that

2018-09-12
Ivana
Previous The conference “Fundamental Readiness in Cyber Defense in the Balkans (FRCDB)”
Next Turkish soldiers back in Kosovo!