Turkish soldiers back in Kosovo! 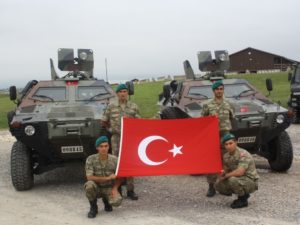 After many years, Turkish soldiers returned to Kosovo. Since March this year, when a new shift of members of the “KFOR” Multinational Combat Group “East”, whose members are in the “Bondstil” base, started a new unit, composed of 80 Turkish special forces commanded by Captain Mehmet Onat. As announced by the US military bulletin “DVIDs” (Defense visual information distribution service), their task is important and delicate-as soon as possible in one or more simultaneous critical situations posing a threat to peace and freedom of movement for everyone, wherever in Kosovo. They are well armed, equipped with equipment to combat disorder and demonstration, and to get to the point where they need to be transported by American “blek-hok” helicopters. Thanks to this, they are ready to react quickly in any crisis situation. In the statement for “DVIDS” Colonel Nik Ducic, Commander of the Multinational Fighting Group “East” praised Turkish troops. He said that in the “Bondstil” base all prices, as well as that they are performing the tasks of the rapid reaction unit, as well as the patrol tasks in the Administrative Security Zone that separates Kosovo and Serbia. Ducic added that Turkish soldiers in the Administrative zone cooperate with members of the Army of Serbia!

Previous Why is 11th September 2001 important for NATO?
Next Almost all Serbian media published false information